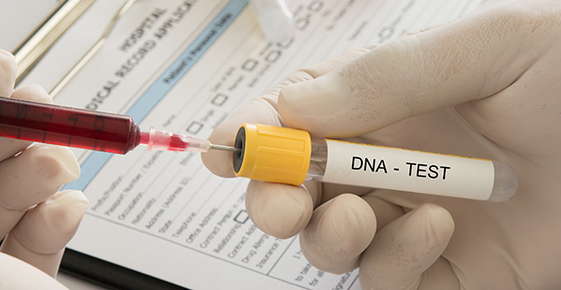 Advances in science have enabled the decoding of several animals' DNA. Knowing the genome of a species has enabled medical professionals to detect some diseases that have a genetic basis. But it also has other uses, even in the criminal justice system.

DNA can be used to confirm the ownership of an animal that has been stolen or to identify the remains of a lost pet. Tissue samples can be compared to items that would have the animals DNA on it, such as brushes, bedding, or food and water bowls.

Cases where animals are a witness are usually human crimes. Animal DNA can link a suspect with a crime scene or a victim. Transfer of DNA from saliva, blood, hair, stool, or urine can occur during the commission of a crime. The UC Davis Veterinary Genetics Lab has been involved in solving or proving several serious crimes. One was a kidnapping and domestic abuse case in West Virginia where they analyzed hair from around a drill bit and blood on a hammer owned by the suspect and matched them to two puppies belonging to the victim. Another case in Texas involved a serial rapist who rolled in dog feces during an attack. The victim owned three dogs, and they matched the stool found on the suspect to the victim's chihuahua. He was found guilty after lab personnel testified.

In a triple murder case in Indiana in 2000, a suspect denied he had ever been at the location of the murders. An examination showed that he had a very small amount of dog feces on a shoe. The UC Davis lab was able match this to the only dog on the property where the slayings occurred. The killer is now serving life in prison.

The use of DNA is opening up a whole new field of science, just one aspect is its use in the criminal justice system. The UC Davis Veterinary Genetics Lab is still in the process of informing criminal investigators of their capability of analyzing any type of animal DNA. Who knows how many cases can be solved now?

We look forward to hearing from you

Find us on the map